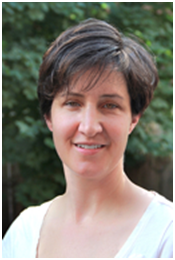 Eden M. Badertscher works to close opportunity gaps in mathematics education and ensure our system of mathematics education is equitable for all students. She brings extensive expertise in teacher education, mathematics curriculum and professional development, alignment with the Common Core State Standards and other standards, and advancing effective mathematics instruction in urban school districts. In the Mathematical Practice Institute, she leads a team in providing opportunities and tools for teachers and school administrators to effectively implement the Common Core Standards for Mathematical Practice. Nationwide, the MPI offers professional development, curriculum support, and technical assistance to schools, districts, and states.

Badertscher also manages projects in the Boston Public Schools and Pittsburgh Public Schools. In both projects, she is working to build the capacity of the districts to meet the challenges set forth by the Common Core and PARCC in ways that make sense given the realities of the respective contexts.

Badertscher is part of a team that was recently awarded a five-year National Science Foundation Mathematics and Science Partnership (MSP) grant to enhance mathematics education for marginalized students. (Read a blog post by Badertscher about the MSP.)

Prior to joining EDC, Badertscher played a lead role in mathematics education reform initiatives in the Pittsburgh Public Schools and Prince George County Public Schools that were designed to support teachers, enhance instruction, and address district needs related to special education, culturally relevant teaching, and work with English language learners. She also taught at the undergraduate and graduate levels. While at the University of Maryland, she was involved in two primary research projects—Case Studies of Well-Respected Urban Algebra I Teachers and Thought Experiments in Mathematics Teaching (ThEMaT). Early in her career, she was a high school mathematics teacher.

Badertscher has particular interests in the Philosophy of Mathematics, critical pedagogies and critical race theory, inequity perpetuated by the system of mathematics education, transforming teachers’ and students’ relationships with mathematics as well as identities of mathematics learners, and the teaching and learning of Calculus.

She received her BA from Princeton University and obtained her MEd and PhD from the University of Maryland.

Register Now for Math on the Planes 2016!

Committed to enhancing the education and quality of life for individuals with learning disabilities across the life span.